Home
Blog
Do We Have Enough Evidence To Call Bitcoin “Digital Gold”? 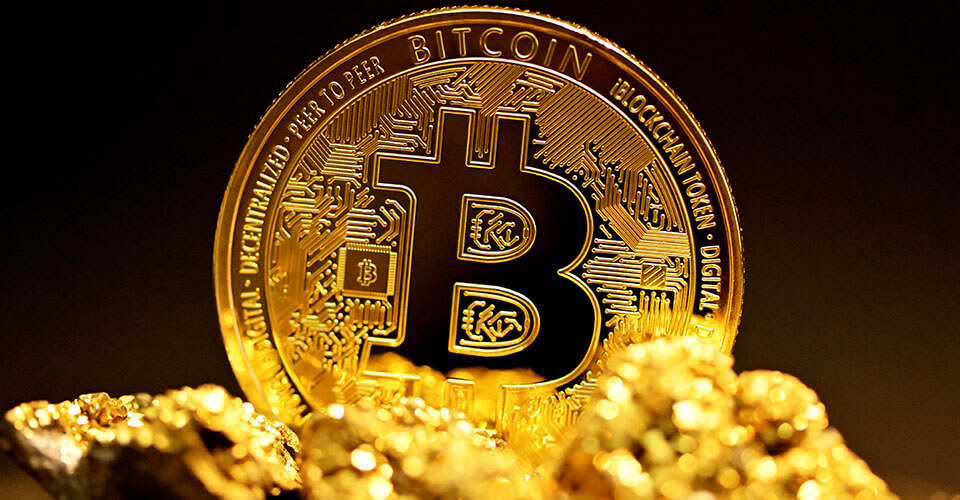 What’s the deal with all these “Bitcoin vs. Gold” articles popping up lately? It seems to be one of those topics that everyone seems to have a strong opinion about. And, since I’m a trendy guy, with plenty of opinions about Crypto, I figured I’d join the party.

One thing I’ve noticed about all these articles, is that they can generally be separated into two opposing camps:

Bitcoin Is The New Gold!

These articles usually include a bunch of really clever charts that have some measure of Bitcoin superimposed on top of the same measure of gold. And what a surprise, they match! 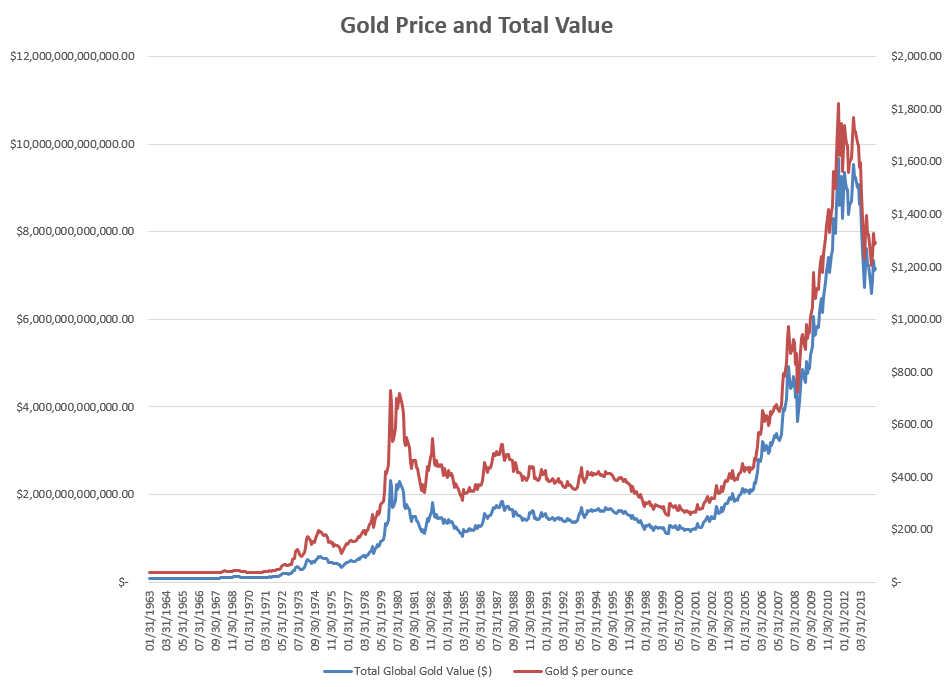 Charts are fun. And they are often informative. But charts can also be manipulated and conflated and overinterpreted and misconstrued.

The naysayers use charts sometimes too, but their main rhetorical strategy is to simply nitpick all the ways in which Bitcoin is very unlike gold.

You’ll see these articles being published en masse whenever BTC drops in price saying things like:

“See! The price dropped! It’s too volatile! It’s totally correlated with financial markets! So not like gold at all!”

Is It Even Worth Making The Comparison?

I don’t know. I can see it a bit from both sides. But all the back-and-forth is starting to feel more like hot air blowing around than substantive debate and analysis.

A quick note to all the staunch opponents: maybe you’re just a little bit too in love with gold and it’s causing you to defame other asset classes with pretty major upsides?

And to all the bleeding-heart proponents: consider that BTC doesn’t need to be exactly like gold, especially since it has the potential to become so much more.

As silly as it seems—comparing a ground-breaking new technology (barely older than a decade) with a precious metal discovered in the earth by primitive people 10,000 years ago—I understand the impulse.

There are several key similarities that invite further comparison:

MINING IS SIMILAR. It’s not a coincidence that the term “Mining” was adopted to describe the process of minting new Bitcoin.

Bitcoin Mining is roughly analogous to gold mining except that it’s restricted to a predictable schedule. Oh and the fact that it’s done virtually with algorithms rather than physically with holes in the ground.

SCARCE & DECENTRALIZED. Both assets can be obtained globally—no single entity, government, or institution will ever be able to exert full control.

And both assets find value in their scarcity. Yes, I know that gold also has a few intrinsically valuable properties, but scarcity remains in the driver’s seat.

PROVEN HARDINESS. Gold has been used as an asset since at least the 5th millennium BCE. We know that because prehistoric artifacts abound, in pretty much their original condition.

Bitcoin doesn’t have that type of track record, but it did make out better in the 2008 global financial catastrophe than a bunch of banks. Plus, the only way to truly get rid of Bitcoin would be to shut down the world wide web. And that sounds more like a teenage dystopian novel than a likely near-future reality.

Learn From The Past, Prepare For The Future

Here’s how I see it: we don’t need or want a golden doppelganger. We need a disruptive, decentralized asset class that connects the entire world and takes back control over the money supply from the governments.

So let’s go a step beyond compare/contrast T-chart from 3rd grade.Using the parallels between the early days of Bitcoin, and the long lifespan of gold, we can extrapolate the ways in which Bitcoin has the potential to become an asset class beyond anything we’ve ever seen!

When gold became something close to a global standard of exchange in the 19th century, trade flourished and progress leaped forward exponentially.

“What an extraordinary episode in the economic progress of man that age was … for any man of capacity or character at all exceeding the average, into the middle and upper classes, for whom life offered, at a low cost and with the least trouble, conveniences, comforts, and amenities beyond the compass of the richest and most powerful monarchs of other ages. The inhabitant of London could order by telephone, sipping his morning tea in bed, the various products of the whole earth, in such quantity as he might see fit, and reasonably expect their early delivery upon his doorstep.”

Bitcoin, however, has a potential to connect the world in a deeper way than gold ever could. Transactions are weightless, virtual, instant, and they can reach any corner of the earth with an internet connection.

As we continue to globalize, and connect peer-to-peer across borders and language barriers with ease, a common universal currency standard is imminent, even if our governments have to be dragged into it kicking and screaming. .

Above And Beyond A Store Of Value

Speaking of Bitcoin as a global currency, I hear people denounce such a possibility on the daily. Those people are jumping the gun, maybe even by a few decades.

William Stanley Jevons writes, “Gold seems to have served, firstly, as a commodity valuable for ornamental purposes; secondly, as stored wealth; thirdly, as a medium of exchange; and, lastly, as a measure of value.”

At this point in time (early 2022) Bitcoin is just now dipping its toes into the “stored wealth” stage of that process. It took gold centuries to mature to that far. Bitcoin has done it in a decade.

So before you tweet about Bitcoin’s price being too volatile to become a stable payment system, maybe try waiting another few years?

When Bitcoin has fully matured as a store of value, and is ready to fully embrace its role as a medium of exchange, it’s going to be unstoppable.

It has none of the same barriers as gold. It’s far easier to exchange, especially on a global scale. A heavy pile of gold bullion simply isn’t going anywhere very fast.

But that’s not even the final stage. Bitcoin will eventually become the measure of value for everything.

Just as alt-coin prices are valued against BTC, so will everything else in the world. Even central bank digital currencies.

Remember when I warned you not to read too much into charts? Here are two charts you should look at: 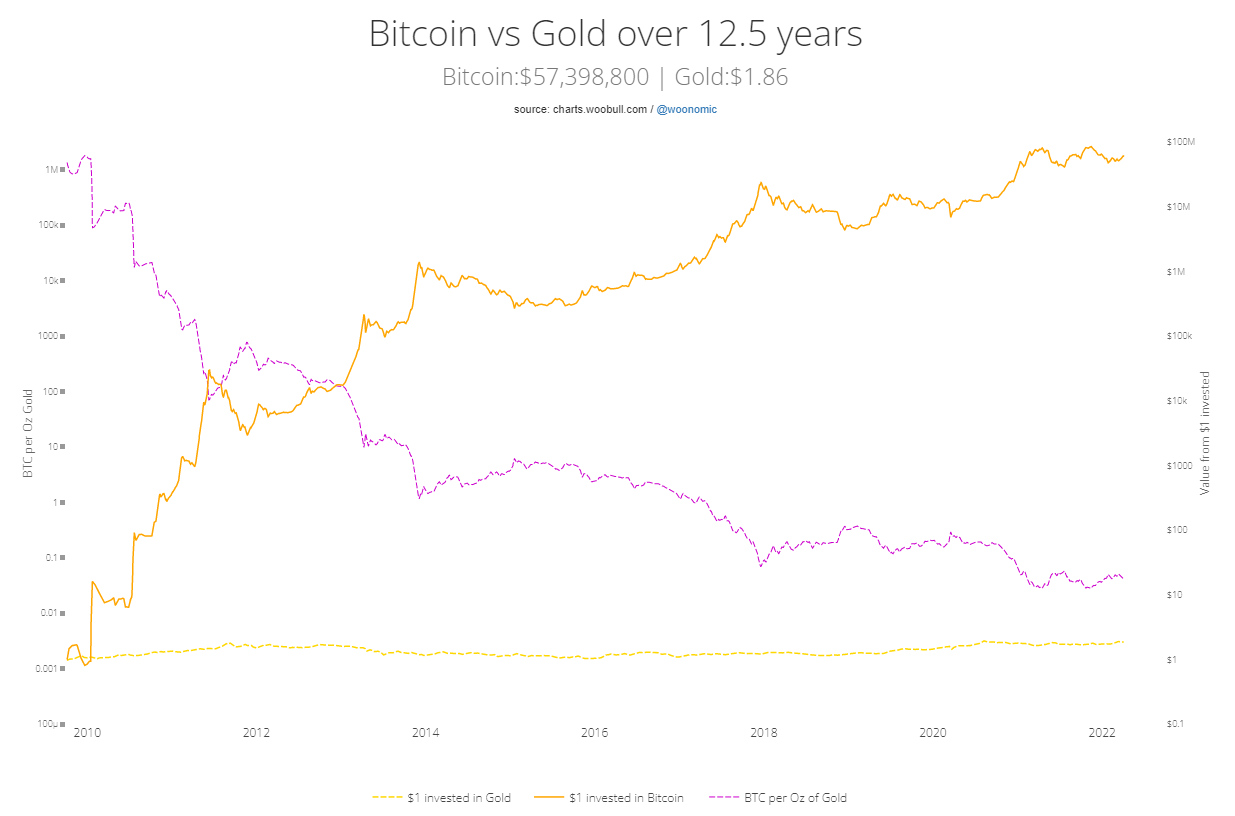 If you were to map the max supply of Bitcoin to the market cap of the current supply of gold, you’d be looking at a value of over $4K per Bitcoin.

That’s with only a budding interest from governments, big business, and other institutions. As adoption grows, so will price potential.

Before long, nobody will be asking whether or not Bitcoin should be called “digital gold” because it will already be so much more.

1 thought on “Do We Have Enough Evidence To Call Bitcoin “Digital Gold”?”